From Stilettos to Sketchers 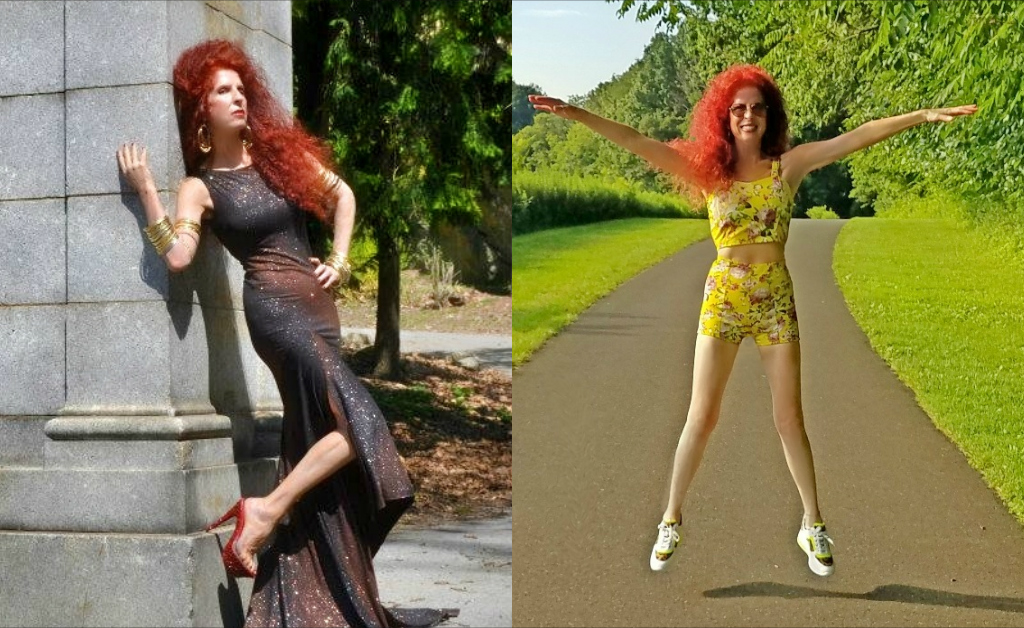 06 Jun From Stilettos to Sketchers

Let me begin by saying I am a born and raised New Yorker. I grew up in Queens in an apartment building where you realize at a very early age that there is no privacy. My mom’s friends would inform her if they saw me walking to school without a hat on a cold day, and I was ‘outed” by another well-meaning neighbor when she spotted me from her window kissing a boy in the playground. I had tons of friends in the building, one being my BFF. I would walk down the stairs from the 6th floor down to the 4th floor where she lived, and never had a fear. We walked to school, hung out, and basically knew nothing else but the cement that surrounded us, and the candy store on the corner (aptly called “Reds”), where Mario’s Italian Ices, a box of sunflower seeds, and a pink Spalding ball cost me my daily allowance. This is what I knew and what made me comfortable. I knew I was a city girl when my parents and my best friend’s parents decided to send us to “sleepaway” camp in upstate NY for three weeks. I think we were around 10 years old. My older brother, who was 13 at the time, also was going. I was excited for the adventure. We boarded the bus, and waved our parents goodbye. After a two to three hour trip, we arrived at camp. Immediately, I got a sinking feeling in my stomach. This just didn’t feel right. My brother was whisked off to the “boy’s camp” which was in a totally separate area. All I saw was greenery, trees, winding paths, and all I heard was the sound of birds tweeting and crickets chirping. We then were shown to our bunks and the cots that would be our beds for the next three weeks, along with cubby holes for our belongings. The sinking feeling was getting worse and worse! I just wanted to go home and be with my parents again. This felt so alien to me and so depressing! My friend immediately took to the surroundings, and tried to comfort me as I wailed that I wanted to go home. I also wanted my brother, but he was in another camp, and I couldn’t really get to him. However, on the third day there, as we were playing some kind of lawn game, I spotted a baseball field where my brother and his fellow campers were playing. I ran over to him crying and said I wanted to go home. Being the typical big brother, he told me to go back and stop being a baby. Oh well….So I tried to muddle through that three weeks that literally felt like an eternity. I swear that greenery and nature just didn’t agree with me!

The day finally came to go home, and when the bus pulled into the Port Authority in Manhattan, the ecstasy I felt was incredible! The concrete, the graffiti, the smell of the city, brought me right back to my comfort zone. I lied and told my parents I had a good time, but my brother told them differently. Anyway, I promised myself I would never go to a sleepaway camp again. It just wasn’t for me. Fast forward to the age of 16, and my friends in my high school sorority had an idea that we should go to camp as CIT’s (counselors in training). I guess I forgot how much I hated country life, because I agreed to go with them. So, again, back on a bus headed for Argyle NY (near Lake George) where the camp was located. We arrived, and once again, that familiar pang of regret hit me. There again were the rolling fields of grass, a lake with rowboats, and the feeling that I left my comfort zone for this Zen, peaceful place. Except it wasn’t Zen nor peaceful to me. I missed the city life, I missed Bloomingdales, I missed taking the subway into the city where I felt the most Zen! Anyway, I cried again, but this time to my high school friends, who were having a blast. They couldn’t understand why I was so miserable. I wanted so badly to talk to my parents, to just hear their voice, but this was before cell phones, and there was no phone anywhere on the camp grounds. However, there WAS a payphone in the Lodge where guests would stay during visiting days. That lodge was about 2 miles away, and one would have to exit the camp grounds to get there. I was desperate, so one day, I walked out of the camp and up a narrow, desolate winding road for two miles to the lodge. I found the payphone and called my parents collect. I didn’t tell them I was upset, just as I didn’t when I was 10, because I didn’t want them to be disappointed that they wasted their money. I just said I wanted to say hello. It gave me some comfort to hear their voices, and then I walked back to camp. I shudder to think how no one even knew I left, and if something happened to me, no one would even know! Times sure have changed! There was no real supervision……

So, now that I have prefaced my early life, you can conclude that the city has always supplied my endorphin rush. When I got married, my husband attended University of Pennsylvania Dental School, so moving to Philadelphia was necessary for at least 4 years. I got a great job, made many new friends, and tried to settle into and accept this new city. But…..it just wasn’t NYC! It was a small town version of a city. Again, I just couldn’t get used to living there, but made the best of it, knowing that eventually we would be moving back to New York where he would set up a practice in Manhattan and we would live in a doorman building. That was what I thought! However, the universe had other things in mind, and when he told me that a friend of his opened a practice in central New Jersey and how it was a beautiful area, and how he didn’t want to go back to the city, how he wanted to be able to have a pool and property, I very hesitantly agreed to take a ride one weekend to see this area of NJ. By that time, my parents had moved out of Queens into a gated community near Princeton NJ. He tried to convince me that we would be closer to my parents if we settled in NJ, and they would help with the kids. Since I was so close to my parents, I knew that it was a practical idea, but I made him promise that we would still go into the city as much as we could. It is only an hour trip with no traffic. So, fast forward. He started a practice, we had three sons, a nice house with a pool, and I settled into trying to be a soccer mom. Well, as you can already guess, I was not a soccer mom. When all the other women were wearing sweats and Keds, I was wearing cowboy boots with shorts. I dressed up to go to the grocery, always wearing my heels and lipstick. A day didn’t go by without someone asking me where I was going because I was so dressed up! Wearing sneakers just wasn’t me, and I am sure my sons were mortified that I wasn’t like the other moms. However, like does attract like, and I found a small group of women who were of the same mindset as me. My kids were friendly with their kids, and we used to get together for lunches, bbq’s and pool parties.

During those early years, we continued to go into the city quite regularly with the kids, taking them to museums, shows and restaurants. They had the best of both worlds. Once they grew up our social life became more and more tied to the city, and between modeling, promoting my book and events that we were invited to, we were traveling into the city 3-4 times a week. It was expensive, but that was our life! It was exciting and fun and I felt like I was back home every time I crossed through the tunnel, even though I had been living in New Jersey for many, many years. It just didn’t feel like home the way NY did. I would walk the streets in my high heels and no one looked at me like I was crazy and no one asked if I was going somewhere because I was dressed up! These were my homies! They understood me!

Now here’s where the story takes a different turn. March 2020, and Covid happens. We had dinner with friends on March 8, and little did we know that would be the last time I would be there for a long, long time. Everything was shut down. My husband was told by the government that he had to close his practice for three months, so he had a forced vacation. But, what does one do when they can’t go into the city, can’t go to a museum, can’t go shopping and can’t work? I heard of people in the city who lived in buildings and couldn’t go down the elevators for fear of catching Covid. They were basically stranded in their apartments with no way to get groceries except by delivery. At least we had cars to drive anywhere we want. This was the beginning of my transformation from a city girl to a suburban/country girl. We decided to take a walk one day because there was nothing else to do. We started with a park nearby. The only pair of sneakers I owned was the pair I used to exercise. I put them on and actually felt weird wearing them out of the house! As we walked, I felt a familiar feeling…a feeling I usually felt when I was walking in the city. But I wasn’t in the city. I was in nature. I was in greenery. I was hearing birds, crickets, and all the very same smells and sounds that disgusted me way back when in camp. But something changed. I felt less anxious. I felt less depressed. This walking in the park was doing something to me that I never felt before. I started to want more and more. From then on, every single day, we found another park, we explored what our area had to offer in terms of trails and scenery. I started shopping online for sneakers! I had them in every color. I stopped wearing high heels, because, after all, you can’t hike in high heels. I looked forward every single day to extending our walks from one mile, to two miles, to three miles, and on and on. Before Covid, I never even knew these parks existed. I never appreciated that living outside of the city offered me so many perks. I took for granted that I had a beautiful backyard, large supermarkets that I could drive to, and red robins and cardinals that greet me every morning.

People and circumstances DO change. I now LOVE nature. I get a natural high taking walks in the park, and after two years, it is still a daily routine. I track my steps, my cardio and my BPM. My body is in better shape than it’s ever been.

Yes, Covid has been the worst thing that has happened. But every disaster has to have a silver lining, and mine is that I found out that stilettos can be exchanged for Sketchers, that the city is not all it’s cracked up to be, and that nature is truly beautiful!

Now, if I could only have a “do-over” of my younger years in camp!