It’s Not Easy to Lose our Parents….Especially from Unnatural Causes 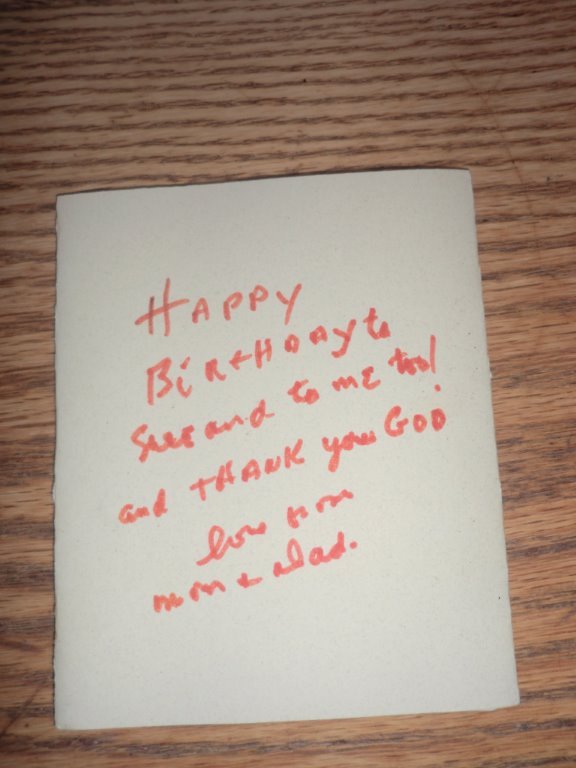 12 Nov It’s Not Easy to Lose our Parents….Especially from Unnatural Causes

I was cleaning up some papers in my office and came upon a handmade birthday card that my mom and dad gave me a few years before they both passed away. I took a photo of the back of the card for the purposes of this blog article, but the front and middle are just as beautiful, with a photo of my mom holding me as a newborn pasted on. I think of my parents every single day, but finding this card sparked some raw emotion and the tears started flowing again, just as they did many years ago when I lost, first my mom, then two years later….my dad.

My mom was a vibrant human being. She was an artist, a chef, a caterer, an avid tennis player, and a friend to everyone who met her. Out of the blue, when she was in her 70’s, she had a massive stroke that left her paralyzed on one side. She was never the same mom, and it was as if the mom I knew died the day she had that stroke. But, in her heart, she was the same, and I learned to get used to this “new” version of the strong mom I had always known. She used to cry all the time and was severely depressed by her condition. How could one blame her? She went from being totally independent one minute to totally dependent on others to feed her. dress her and bathe her. She couldn’t do her art, and it was up to her family to cheer her on through this terrible ordeal. Eventually, she got used to her situation, and she started drawing again with her one hand. She would create hand-painted stationery for anyone who was kind to her, including doctors, nurses, rehab technicians and the like. Her heart was pure gold. One day, about two years after her stroke, she had a seizure. She was rushed to the ER and my dad was told that an MRI showed a mass in her brain. It was then that he was told that she had the worst kind of brain tumor…..a glioblastoma. When I heard the news, it was as if I was hit by a train in my stomach. How could this happen now? She was just beginning to adapt to her new reality, and now this. My dad refused to let her die, even though the doctors told him there was no hope. She went through grueling treatments of radiation therapy, which only made her worse. We finally told him to let her be…..I sat by her side every single day until she took her last breath. The day she died, a part of me died too.

My dad, who for some time before my mom died, was told he needed dialysis since his kidneys were failing, refused to take it because he wanted to be able to take care of my mom and not be away from her for a second. Once she passed away, even though he had lost his will to live, we talked him into taking the dialysis because we didn’t want to lose him too. He wasn’t thrilled about it, but I think he did it for his kids. After two years, while I was visiting him, he told me he wanted to die. He no longer had anything to live for, and he wanted to be with my mom. He begged me to let him quit dialysis. As a daughter, my heart broke and I pleaded with him to change his mind. He was adamant. I then spoke with his doctor who advised me that it is his choice and I should respect his wishes. So….again, I had to watch a parent slowly die in front of my eyes. The only positive thing about my dad’s situation, is that he was THE happiest I had ever seen him when he actually knew that he could now soon be reunited with my mom. He couldn’t wait! It took two weeks exactly for his kidneys to fail, and I was there with him when he died.

I don’t care how old we are….the death of a parent is never easy. It always feels sudden — even when it’s not. People often expect that the death of someone older or someone who’s been ill for a long time will feel easier to endure because it’s predictable. Yet the disappearance from your life of a figure you’ve known since birth is, when it finally happens, always a sudden change. I know my parents lived a full and exciting life. They traveled the world, they had tons of friends, they lived to meet their grandchildren. This is a lesson for all of us:Take a look at your life. How would you describe it? Contented? Rushed? Exciting? Stressful? Moving forward? Holding back? For many of us it’s all of the above at times. There are things we dream of doing one day, there are things we wish we could forget. But..think about it: We have no clue what is ahead of us. Love your parents, love your fellow man, live your life, and forget about petty nonsense. I wish, just for one day, I could hear my parents’ voices again. I wish I could hear my dad sing, and I wish I could smell the aroma of my mom’s cooking. Thank goodness they left me with so many great memories.