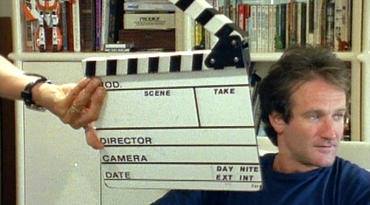 Here’s a blurb written by my brother, who produced the 60 Minutes segment on Robin Williams back in 1986. He wrote this for CBS news to accompany their re-airing this interview…:

“It wasn’t an easy sell, convincing Don Hewitt to let me shoot a profile of Robin Williams. It was 1986, before “Good Morning, Vietnam, ” before “Good Will Hunting, ” before “The Birdcage. ”

“Mork? You wanna do a piece on Mork?” 60 Minutes profiles were reserved for “legends. ” You know, Bette Davis, Lena Horne, those kinds of cultural icons. On top of that, I was the investigative guy. What did I know about doing celebrity profiles?

At the request of Williams’ manager, I had agreed to have dinner with Robin. After about 15 minutes, I realized this wouldn’t be a celebrity profile, but a story about the craft of comedy, about comic genius (and that’s what the segment ended up being called). Don relented and agreed to let me shoot the story (knowing, as was the case with any story, it was my rear if it didn’t pan out). In the end, “Comic Genius” became one of Don’s favorite stories, primarily because it revealed who Robin Williams was as a person — a brilliant artist more concerned with shining the light on others than on himself.

Throughout the two weeks Ed Bradley and I spent with Robin, he was all about making sure other talented comics got their due. “You have to shoot Sam!” (referring to Sam Kinison, the brilliant stand-up artist). I did shoot miles of film of Kinison at The Comedy Store in Los Angeles, but most of that material was off-limits for prime time television. Robin also made sure we highlighted his pal Rick Overton, another amazing improvisational comedian. That sequence did make the cut.

Finally, there was Jonathan Winters. Williams considered Winters his mentor, the spark plug that ignited his interest in the comic stage. There’d be no Robin Williams story without a tribute to Jonathan Winters. The resulting sequences were priceless.
All this goes to say, for a guy who could have easily had an “all about me” spot on 60 Minutes, more than half the story was about other people. That says something. “