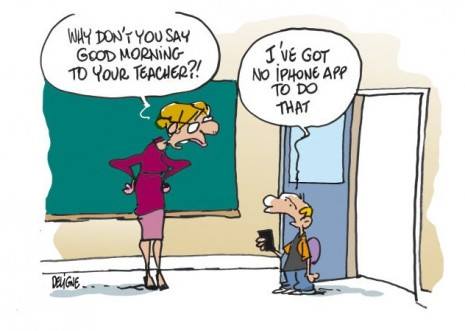 I still can’t forget this. A few months ago, my son was sick with a fever. I told him to call the doctor so he can be seen and diagnosed. He said he would email him instead! I told him that’s not the way it happens. I even find that he rarely answers his phone, but if I text him, he will then reply. This is the new reality. It’s called “technological detachment”. Instead of spending time in personwith friends, we just text, email, or Facebook message them. It may seem easier, but we ultimately end up seeing people face to face a lot less. A hundred texts can’t even begin to equal an hour spent chatting with a friend over lunch. And a smiley-face emoticon is adorable, but it could never replace the smile of someone you see in person. Studies show that personal interaction is comforting and provides a sense of well-being, whether it’s friends, family, or the bank teller. There’s something wonderful about seeing the expression on someone’s face and hearing the tone of a voice on the phone. This becomes an important human connection, not just a disembodied text “voice” on your cell or computer. Don’t get me wrong: Technology is great, and it has allowed us means to socially connect with long-distance people that would never have been possible before. But, let’s get back to connecting on a personal level and not rely on technology to constantly do the job for us. #dailyinspiration #susankorwin #lifecoach #author #simplestridestowardpositi vechange