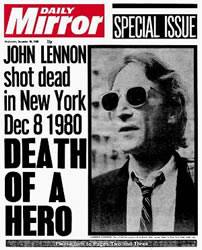 There are certain dates that we, over a certain age, consider “days that will live in infamy”. For those who witnessed the attack on Pearl Harbor, December 7, 1941 is that day. For those of us who were alive in the 60’s, November 22, 1963, the day that President Kennedy was shot, is a day that will live in infamy. Another day that will live in infamy, and one that sticks in my mind like it was yesterday, is the day, this very date, December 8, 1980, that my hero, John Lennon, a member of my favorite musical group of all time, was assassinated in front of his building in NYC. I remember mourning as if a member of my family died. It was heart-wrenching. I met John Lennon one day while walking along 72nd Street on my way to visit my brother. I had to pass by the Dakota, where he and Yoko Ono resided, and he happened to be getting out of his car as I walked by. He said a quick “hello, how are you?”, and I floated on air the rest of that day. He was so kind to acknowledge me, and that memory is still fresh in my mind. Even after more than three decades, he is still cherished by many. We continue to miss his wit, his talent, his music and his intellect. He had his flaws, just like all of us. and, as he said, “he was just a guy who wanted to play rock and roll”, But…. look how far he came? Who knows what else he could have accomplished. He wanted peace……let’s try to honor his memory by “giving peace a chance”.